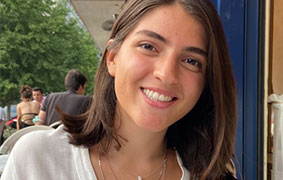 Tell us about yourself.
Hello there! I'm Elif Arıman. I am a second-year student at Sabancı University. Being the daughter of a father (Salih Arıman, Advisor to the President) working at the Sabancı University since its foundation and the sister of a Sabancı graduate who takes justified pride (Zeynep Arıman, 2018 SBS Graduate), I can say that I am quite familiar with both the academic and social life of our university. It is a great pleasure to be able to walk around the grass as a Sabancı student where I fly kite when I was little :)

Did you know about the First Year University Courses that constitute most of our core curriculum before you arrived at SU?
From the perspective of a student, I heard a lot about Sabancı, academically, from my sister. So I knew the courses I would take in the first year. Honestly, my university entrance exam score was in Turkish-Math so taking NS course scared me at first. “How am I going to remember the Physics-chemistry-biology topics that I studied two years before and pass this course?” I said. But things did not turn out like that, because our professors explained each topic from the basics by adding information on top, so it became easier to make the connections in between. Of course, recitations were also priceless! It is very valuable that First Year University Courses eliminate the distinction between “Turkish-Math” and "Quantitative" backgrounds and provide the same social and natural sciences foundation to all students. I believe this pathway allows Sabancı Students to be unique. Engineering students besides their own fields graduate with a solid background in Turkish and world history and major works and business school students graduate with a scientific perspective upon the world and the universe. This is a great vision and provides us global citizenship role. Additionally, it is very valuable for us because it provides us the opportunity to get to know different programs and discover our own field of interest.

Which major do you want to choose? Why?
Believe me, I am also curious about the answer I will give at the end of the next semester to this question :) My dream for years is to become an academician in one of the fields of social sciences. However, I want to decide my major by taking the introductory courses of the different programs I am interested in and getting to know the programs. At the moment, I am interested in both Political Science and International Relations, and Economics programs. When I was in high school (I graduated from Private Bahçeköy Açı High School), I had the opportunity to take the elective course “Political Sciences and International Relations” lectured by Prof. Dr. Ahmet Kasım Han. I realized that I was deeply interested in the topics he mentioned during the class and this inspired me to make further research.

Once he told me on his way out of class that the way to be good in political science is to know economics, the field of economics was also included in my research list. When I came to Sabancı with these "what ifs", something started to become clear in my mind during the first SPS 101 class. Emre Erol was the lecturer and in the second half we were introduced to the subject; the first topic was “Modernity”. I remember that I was focused and after turning off the zoom, I excitedly conveyed every word he said, those which are still on my mind, to my family for two hours. In addition to realizing that the topics deeply interested me, also he became an academic role model to me as a Sabancı Graduate! Even though I delayed weekly readings a bit during busy weeks, my interest in the course content continued. It continues. In the second semester of the first year, I worked on a project on the Syrian refugee issue in Turkey supervised by Samet Apaydın in terms of the PROJ 201 course, which increased my interest and knowledge of political science and international relations. I didn’t have much chance to focus on economics compared to political science. But I am curious about it. Connections between history and economics mentioned during SPS classes draw my attention, so I started to plan to double major in PSIR and ECON. I realized that there are a bunch of common mandatory courses of these programs so that in the first semester of my second year I am planning to take these common mandatory courses plus introductory courses of these programs then I will go ahead and decide. Of course, at the end of the next semester, something 180 degrees different may come up. This flexibility of our university is unique :) But I don't expect my dream of becoming an academician will change.

Has there been a change in your perspective on the world, science, global trends after taking these courses?
I can say that my perspective on the world and science has changed with NS 101/102 courses, and my perspective on Turkey in particular has changed with HIST 191/192 courses. First of all, it's nice that NS courses are structured as modules based on basic questions each semester. Realizing that a single question to be asked about the world, about the universe, raises hundreds of questions, leads us to research and not be satisfied with superficial answers. Yes, maybe we had only one answer in our minds to the questions we asked at the beginning. For instance, our answer to the "Is the climate really changing?" question of the climate module of NS 102 was bare “Well of course! Glaciers are melting!” turned out to have a scientific base. Dozens of questions and issues just like this which we thought having one single answer. History lessons, on the other hand, contributed a lot to my knowledge, regarding Turkish Political history. I was also lucky in terms of our history lessons back in high school, so I can say that my interest in history dates back to my high school years. HIST 191/192 courses increased my knowledge about the political order of Turkey, the parties, and the military coups, especially after the proclamation of the Republic. While this increased my interest in social sciences and my desire to make research, it helped me on making sense of many social and political events happening around me.