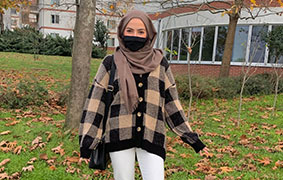 Tell us about yourself
Hello, my name is Hagar Fadda, and I have finished my first year at Sabancı University. I have Swiss nationality, but I am originally from Lebanon.

Which major did you want to choose? Why?
Molecular Biology, Genetics, and Bioengineering. I was actually introduced to this major in the UK when I visited some of the universities, and it interested me very much. I had a newfound interest in studying human genes. I wanted to previously study medicine, but once I realized that it wasn’t for me because of the life commitment that it required as well as realizing how much I needed to compromise for it, I decided to pursue something that is not too far from medicine and that would still allow me to follow my love for Biology. Once I found out that Molecular Biology, Genetics, and Bioengineering was provided at Sabancı University, and I realized how flexible the University has made it for us to be able to take courses from different faculties to solidify our choice in major, my decision was set.

Has there been a change in your perspective on the world, science, global trends after taking these courses?
Definitely. After taking these courses, I have become much more educated on worldwide issues which has allowed me to choose certain points of views that I now support in order to discuss with different people. For example, I was able to learn more about global warming in NS which has now allowed my new perspective towards it to be used while debating with other people. Additionally, studying about power and identity in AL 102 has introduced me to many important figures as well as taught me things I would have never researched on my own, for this information has now given me the opportunity to start the conversation about important and controversial issues.